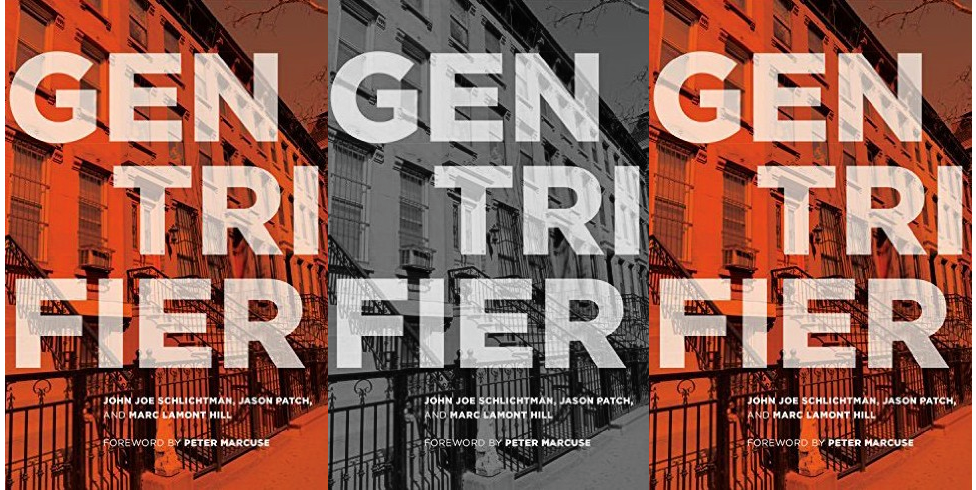 GENTRIFIER opens up a new conversation about gentrification, one that goes beyond the statistics and the clichés, and examines different sides of a controversial, deeply personal issue. In this lively yet rigorous book, John Joe Schlichtman, Jason Patch, and Marc Lamont Hill take a close look at the socioeconomic factors and individual decisions behind gentrification and their implications for the displacement of low-income residents. Drawing on a variety of perspectives, the authors present interviews, case studies, and analysis in the context of recent scholarship in such areas as urban sociology, geography, planning, and public policy. As well, they share accounts of their first-hand experience as academics, parents, and spouses living in New York City, San Diego, Chicago, Philadelphia, and Providence. With unique insight and rare candour,  GENTRIFIER challenges readers’ current understandings of gentrification and their own roles within their neighborhoods. A foreword by Peter Marcuse opens the volume.

101 Books About Where & How We Live
Curbed

“John Joe Schlichtman, Jason Patch and Marc Lamont Hill clearly engage in the theoretical and policy debates surrounding gentrification while offering very smart analyses of their own narratives. There is a lot out there on gentrification but Gentrifier is most definitely fresh!”

“The co-authors of GENTRIFIER take a daring tack: Professors all, they break the third wall of social science to admit that their interest is not purely academic.”

“Schlichtman, Patch, and Hill help us shelve what we thought we knew about gentrification, and give us instead a brutally honest reckoning with the ills, conveniences and virtues –but especially the consequences on the vulnerable– of gentrification.”

“The authors…have produced a unique and important contribution to the progressive literature on gentrification, one that truly does work in the much-sought middle ground between supply and demand side explanations of this form of urban change.”

“Drawing together an accessible synthesis of the relevant scholarly literature with extracts from personal journals, field-notes and the systematic recall of past events, the book offers an interesting addition to the field that usefully and constructively engages some difficult issues that gentrification researchers have long been happy to overlook, presenting a series of informed, personalized, micro-level insights into how academics and activists who are ostensibly critical of gentrification can themselves become gentrifiers.”

Lee Crooked
J. of Housing and the Built Environment

“GENTRIFIER…provides not only a glossary of terms, but also tools and rules of engagement for deploying this thing that—if we can all agree on nothing else—has now become a fully loaded and weaponized word. The function of this breakdown is that by using a more scrupulous lexicon for describing the changes happening to one’s neighborhood or environment, legislators and regulators can be more responsive and accurate in their policy proposals.”

“GENTRIFIER does a masterful job of explaining, unpacking, and grounding the key analytical concepts that underpin debates on gentrification.”

“[GENTRIFIER ] is a powerful reminder of the need for a new framework for urban development that re-imagines and re-situates the position of a variety of actors in the urban/suburban landscape.”

Sheila Foster
The Nature of Cities

“[GENTRIFIER ] encourages society to look inward, arming us with tools and experience to dissect our ideologies to better understand gentrification and gentrifiers.”

“This is a very interesting piece of work that is likely to draw some attention and may even create some controversy in the gentrification studies circle.”

‘This book provides a welcome corrective to the slap-dash way ‘gentrification’ is used as an explanatory force in popular narratives … It would be a valuable addition to reading lists on urban studies, urban geography and urban planning.’

“[GENTRIFIER ] queries many canonical assertions about gentrification too often unchallenged by scholars. Considering the volatility of such pursuits, I was reassured to find that all three intrepid contributors appear to occupy safely tenured slots on their respective campuses.”

“Schlichtman, Patch, and Hill succeed in constructing a corrective to overly deterministic analyses by focusing on gentrifiers’ motivations, situations, agency, and relationship to structural conditions and social forces. The breezy writing style makes this volume appropriate for undergraduates, activists, and anyone else interested in starting thorny conversations about one’s own participation in gentrification.”

“GENTRIFIER is a noble attempt to
enrich the vocabulary used in debates over gentrification. It aims to move beyond the paralysis of the conversation, where in there’s no hope of improving neighborhoods without the current cultural and economic displacement that gentrification so often entails.”

“While there has been much said
on the issue of gentrification, GENTRIFIER encourages urban scholars to reframe conventional discussion and ensures the conversation remains fresh.”

“Arguments about the benefits and drawbacks of gentrification—held in university seminars, city council meetings, and street protests alike—will not fade anytime soon, and GENTRIFIER is highly recommended for anyone who wants to participate, in a self-aware and reflexive manner, in those arguments.”